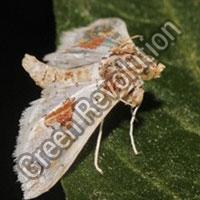 Host crops : Brinjal Fruit and Shoot Borer (BFSB) is a very dangerous pest of brinjal. It not only reduces the yield by making holes in shoots as well as in fruits but also reduces the aesthetic value of the fruits so loss get doubled. It is a monophagous pest feeds only on Brinjal. The normal control measures like spraying of pesticides does not solve the problem instead making the environment polluted, ecological disturbance and vegetable poisoning.

Pest Identification : The adult is greyish-brown moth with white wings. The fore and hind wings are provided with marginal hairs and bears pinkish-brown spots. The adult size is 20 mm across the spread wings.

Damage To Crop : Larva is a internal feeder, it immediately bore into the nearest tender shoot or flower or fruit just after hatching,. Soon after boring into shoots or fruits, they plug the entrance hole with excreta. As a result, the affected twigs, flower and fruits dries up and may drop off. Presence of wilted shoots in an eggplant field is the surest sign of damage by this pest. This reduces plant growth, which in turn, reduces fruit number and size. New shoots can arise but this delays crop maturity and the newly formed shoots are also subject to larval damage. Larval feeding in flowers results in failure to form fruit from damaged flowers. Larval feeding inside the fruit results in destruction of fruit tissue. The feeding tunnels are often clogged with frass. This makes even slightly damaged fruit unfit for marketing. The yield loss varies from season to season and from location to location.

Lcu-0 Lures : Set up Delta trap with LU-C Lure to monitor, attract and kill the male moths @ 12 nos./ha and change the vial once in 3 weeks.