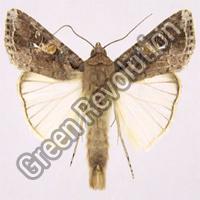 Host Crops : The armyworm's diet consists mainly of  Maize and Rice crops such asÂ corn but the species has been noted to consume over 80 different plants.

Pest Identification : The life cycle is completed in about 30 days during the summer, but 60 days in the spring and autumn, and 80 to 90 days during the winter. The number of generations occurring in an area varies with the appearance of the dispersing adults. The ability to diapauses is not present in this species. In moths are abundant from April to December, but some are found even during the winter months.

Damage To Crop : A Egg are laid on the underside of the leaves, freshly hatched larvae move downwards to leaf sheath and feed on inner tissue, With the advancement of growth and development larvae bore into stem bore into stem and feed on inner surface. Due to such feeding at vegetative stage the central leaf whorl unfold, turns brown and dries up which is termed as Dead Hearth. Infestation after the panicle initiation result in drying of panicle which may not emerges at all and those that have already emerges do not produce grain and appears as white head.